the final day of the #WindRider blog tour

I have read a few P.C. Cast books in my lifetime – I think it is virtually impossible to not read a P.C. Cast novel at some point in your reading adventures, but I believe that I have not read such a detailed, character-driven novel by Cast than that of Moon Chosen. As a result of not reading the Tales of a New World Series by P.C. Cast, for this blog tour I read the first in the series, Moon Chosen, and I am incredibly happy that I did so. Moon Chosen centres upon the perspectives of the two central protagonists and the main ‘villain’, so it is a multi-perspective narration, within a futuristic post-apocalyptic slash dystopian world where humans have evolved and devolved into different peoples with different supernatural abilities or needs. The synopsis is as follows and can also be found on GoodReads:

Mari is an Earth Walker, heir to the unique healing powers of her Clan, but she has been forced to turn from her duties, until she is chosen by a special animal ally, altering her destiny forever. When a deadly attack tears her world apart, Mari reveals the strength of her powers and the forbidden secret of her dual nature as she embarks on a mission to save herself and her people. It is not until Nik, the son of the leader from a rival, dominating Tribe, strays across her path that Mari experiences something she has never felt before…

Now evil is coming, and with it, a force more terrible and destructive than the world has ever seen, leaving Mari to cast the shadows from the earth. By breaking Clan Law and forming an alliance with Nik, she must make herself ready. Ready to save her people. Ready to save herself and Nik. Ready to embrace her true destiny…and battle the forces that threaten to destroy them all.

Delving into the narrative-world itself, P.C. Cast has crafted a universe that is incredibly imaginative and extraordinarily detailed. Humans are divided into different peoples or tribes and each is connected to an aspect of the environment. This may sound quite ambiguous, but there are peoples who are connected with an aspect of the environment but also of an animal or form of light. Others with something such as wind or skin. It can also be quite confusing at times if I am being completely honest.

The main female protagonist, Mari, is an Earthwalker and also a Moon Woman. From what I understand, being a Moon Woman is to be specifically chosen by the Earth Mother Goddess, for the ability to be trained as a conduit for the healing power of the moonlight. The Earthwalkers are ‘cursed’ in the sense that they need to be ‘cleansed’ by a Moon Woman every three nights, in order for the women and men to not fall into a depressive state or violent aggression, respectively. Mari’s mother, Leda, was the official Moon Woman whose job description entails that of a healer, leader and all-round miracle worker. Those women in the tribe who are born with silver/grey eyes indicates their ability to be the Moon Woman, but it is ultimately up to the Moon Woman herself to choose her own apprentice and the future leader of the tribe. Although Mari is Leda’s daughter, Mari’s secret dual nature hinders her ability to be Leda’s apprentice in the beginning; however, her unfiltered power and ability to harness the moonlight, proves her worth.

Mari’s dual nature is written as if it’s two completely different and warring aspects of her nature when in reality, I feel that they complement each other and enables Mari to be as powerful as she is. Mari is also half Companion, which means that she has the ability to connect with a canine animal that chooses her as a result of a pre-destined bond. There are variants of Companions, for instance, the readers are told that in addition to Canine Companions, there are also Feline Companions. I am hoping that the other novels in the series will further explore this aspect as it is quite intriguing; I think of it as a twist upon the more traditional understanding of ‘werewolves’ or ‘shapeshifters’ who share half of who they are with their animal counterparts. I will have to say that Mari’s Companion, Rigel, is the most adorable and purest dog to have ever lived and he deserves all the hugs and kisses.

Without giving away any spoilers concerning the story itself, the shift in the overall narrative occurs when Mari meets the male protagonist, Nik. Nik is the son of Sol who is the Sun Priest and leader of their tribe, the Tribe of the Trees and they are Companions. Rigel, Mari’s Companion, is originally from Nik’s tribe and is actually the puppy from Nik’s father’s own Companion. Mari’s birth father was from this tribe which cements a sort of fated element to Nik and Mari’s meeting, and the events which transpire that result in their friendship.

In terms of its characters, Cast has an incredible ability to create whole and three-dimensional people that have a raw emotional element to their characterisations. Mari, for instance, is written with an understanding of her own flaws. One of my most major of pet peeves is when a female protagonist is written as someone who is ignorant of their own weaknesses or places blames on others for their own mistakes. Mari is certainly not that woman – to be honest, she is written as a woman who is still growing into her own. She doubts herself, she knows her strengths, she knows when she may need help and she always tries no matter what. I find that to be such an invaluable trait for a woman in a young adult novel to be! A woman who continues to fight when she feels as though there is nothing more to fight for. But that’s not to say that I agree with every single aspect of her characterisation. There are points during the narrative when I felt that the ‘problems’ Mari was having about her ability to act as a conduit of the moonlight, seemed forced and unnecessary. Especially considering that the issue Mari had in these instances were so easily ‘fixed’ by someone else telling her she can do it – Mari goes from feeling completely useless and doubting herself to saying ‘you’re right! thanks’, and that would be one of the aspects of that was quite frustrating as it did not really fit with who she was becoming. I would have to say that there is also a ‘saviour’ aspect to Mari’s characterisation, which I still don’t know how I feel about as yet; which just means that I need to read the next books in the series! 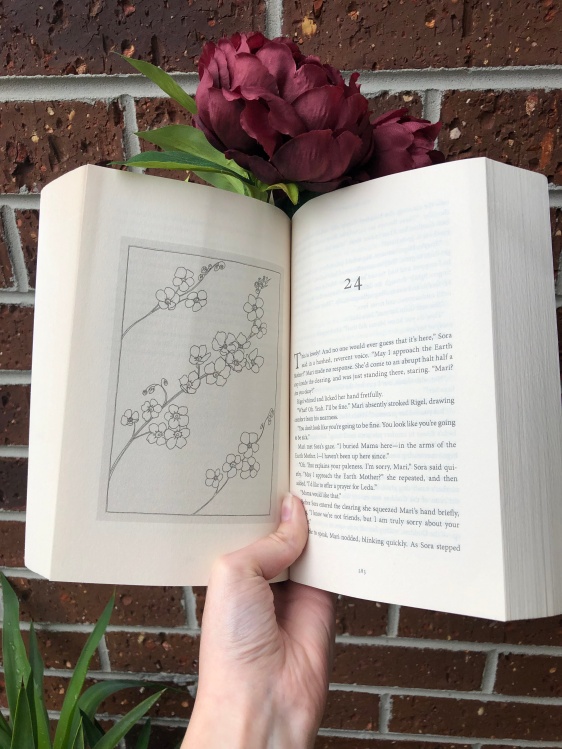 In terms of the male protagonist, Nik, I felt as though he was written well, but I felt that Mari’s experience in this first novel of the series, was really placed in the centre. In saying that though, Nik is a great male character, especially in terms of his characterisation. He complements Mari so fantastically, and he does so with such unwavering support and growing adoration and belief in her and her abilities. Nik demonstrates a wonderful ability in being able to grow up and progress from the traditional notions of his Tribe, in order to better it and the way it treats other ‘races’ of people. I am hopeful that in the next novels, Nik’s character is more deeply explored as I feel that his abilities and what he can bring on his own, will be worth it.

Moon Chosen was a fabulous read, but I would have to say that it is quite long which is not a negative thing, but in this case, it felt too drawn out. The narrative does not pick up until 400 pages in, so we only get the forwarding of the story for 300 or so pages, which made me feel slightly frustrated as Moon Chosen became so wrought with action and intrigue that I could not put it down! However, I do understand why Cast did this, as with a universe that is so intricately built, the author needed to slowly and in detail, introduce the world in which the narrative is taking place. I also felt that the actions and ideologies of the Villian/s, Dead Eye and Dove of the Skin Stealers, reminded me so much of the political climate that we see today – especially with the likes of Donald Trump. It can be quite terrifying to see something like that translate to a novel which depicts a supernatural post-apocalyptic world. In that sense, one could also see the translation of extreme racism within the relationship between Earthwalkers and Companions; thus, I urge you to read with a critical eye as it can convey quite a powerful message.

As such, I would rate Moon Chosen by P.C. Cast a 4 out of 5 stars. I thoroughly enjoyed it, especially the last 300 pages or so and I feel that any reader interested in a slight paranormal/supernatural YA novel should give Moon Chosen and the Tales of the New World series a chance, as it really is a wonderfully crafted story with great imagination and characters who grow and learn as the story progresses. The Tales of a New World Series includes the following books: Moon Chosen, Sun Warrior and the newly released, Wind Rider. Wind Rider is not the concluding novel, and the series will continue! So be sure to be on the lookout for dates of release in the future!

I also want to extend my gratitude to P.C. Cast, Pan Macmillan Australia and #AusYABloggers for the opportunity to be a part of this blog tour for the release of the third instalment in the series! I was given a free copy of Moon Chosen in exchange for an honest review.

That’s it, my loves! Until next time, happy reading!