The Myth of Sisyphus

Have you ever read a book that leaves you utterly speechless? The words leave you in awe? Or complete and total confusion?

This was that book.

Albert Camus’ The Myth of Sisyphus was written in 1942, during the worst of World War II. It was originally written as a philosophical essay, in French, translated by Justin O’Brien and published in 1955. Camus aimed to explore the futility of the absurd man and his meaningless search for clarity, the significance of life and unity in the face of a world lacking any sort of divine truth or Supreme Being. Fundamentally, Camus attempts to investigate whether the fate of the absurd man lies in suicide – suicide as the realisation of the absurd and thus, the only way for man to find any sort of meaning. Consequently, Camus comes to the argument that for realisation to occur, the absurd man must revolt.

I have to admit it took me quite a few tries to understand what in the hell was going on – I haven’t read anything as complex in its philosophical language since my second year of my undergraduate degree, so at times, I did find it quite challenging. Before I go into a brief summary of each chapter, I wanted to extrapolate on my own personal perceptions of this book. You will find no argument from me concerning Camus’ writing. I am going to emphasise that, as the reader, you will sit and bask in the authenticity of his written word, and how beautifully articulate Camus is. I want to talk about the context of the book, and how I felt whilst reading it.

So? You may ask, well, Pascal Pia was a legend. Remember how Camus wrote this in 1942? Pascal Pia was a French writer, journalist, scholar and all-around epic dude, who participated in the French Resistance during World War II. In 1944, he then became editor-in-chief of the resistance journal Combat, stating that “we will try to make a reasonable newspaper. And as the world is absurd, it will fail”. Albert Camus also wrote for the resistance newspaper Combat and soon, as one can tell from the dedication, they became quick friends. Considering this essay was written in the midst of a World War that France themselves were fighting in, I thought there was also an underlying theme of desperation and hope. In a time where the futility of life was seen by the deaths of soldiers on the front, and of millions of European Jews, Camus is struck by the utter meaninglessness of life – but also, in how we can grasp the meaninglessness and mould it to something that would fundamentally please the absurd man. I find the historical context of this book fascinating and something that the reader needs to be aware of before entering this particular piece of literature. 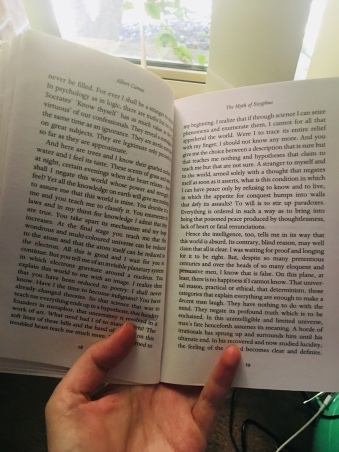 Ok, now let’s get into a brief summary of the chapters themselves. Chapter One is An Absurd Reasoning, and acts more like an Introduction to Camus’ thesis, more than anything. He introduces his question concerning whether suicide is the only viable option for when the absurd man realises the meaninglessness of his life. In this sense, the absurd man characterises man’s futile effort to search for meaning when there literally isn’t anything that will bring forth an enlightened or liberated ‘truth’. He explores the possibilities that the absurd man can do that do not require suicide, coming to the philosophical conclusion of three consequences that comes with the realisation of the absurd: revolt, freedom and passion.

Chapter Two, The Absurd Man, thus follows on from the resulting three concluding consequences, and Camus then presents the reader what exactly demonstrates the absurdity of life. I believe this quote perfectly surmises Camus’ point:

Assured of his temporally limited freedom, of his revolt devoid of future and of his mortal consciousness, he lives out his adventure within the span of his lifetime (p. 64).

The absurd fact, according to chapter two, is a godless world where men think clearly and without hope. Seems pretty dismal, but that is exactly Camus’ point.

Chapter Three, Absurd Creation, focuses on the most absurd of all. The Creator of the absurd. I must admit this chapter threw me for a loop, and this summary may not even be at all what the chapter was articulating, but I think Camus was highlighting how the absurd can be seen in art? Rather, if our world was completely clear and free from the absurd as Camus has described, there would be no art or no sense of creation in the world as we know it today. There was also an idea concerning hope, but I honestly wouldn’t really understand how to put it into words, because I am not too sure I understand it fully myself.

Chapter Four, The Myth of Sisyphus, gives a very brief narration of the Greek myth of Sisyphus. The myth itself focuses on Sisyphus, who unfortunately decided to defy the Gods, and well, his punishment was to be death (but good ol’ Sis decided to place Death in chains so that no mortal human could be killed ever again, but Death eventually broke free) but Sis figured out a way to get out of the underworld, and he ran. So the Gods decided that his punishment needed to be changed – one that he would face for the rest of eternity. His punishment, you ask? Well, Sis had to push a rock up and mountain, watch it roll back down the mountain, and then push it back up and so the cycle continues for the rest of eternity. Camus thus percieves Sisyphus as an absurd hero, who hates death, attempted to experience all that life tried to offer and is thus punished with a ‘meaningless’ task for the rest of his life, with no purpose or anything.

So that’s it. To be quite honest, I would only recommend this book if you enjoy reading quite dense philosophical prose, then go for it. But otherwise, maybe steer clear until you feel like your up to it!

Till next time! Happy reading ya’ll!

📚 March TBR! the colour for this month is purple (Twitter voted) so most of the books this month have purple somewhere on the cover.
🌸 february reading wrap up! the theme of feb was ✨pink✨ so most of the books I read had pink on the cover!
what the fuck was this book.
💕hiya booknerds. I’m currently sitting in a cafe of my old university with my mum in the city. My mum may have made us leave home at 7am for a 9:45am appointment. We are literally an hour early.
✨rilke. what an experience. there are very few times when I say to myself that I wish I could meet an author. Rilke’s letters were so beautiful - I wish there was more. I was blown away by the eloquence and the beauty of his words. Highly recommend!
the first five star book of 2021. I don’t really know how to describe this book but I will say that the writing was an experience in of itself - it was lyrical and beautiful. The story between agents Red and Blue was stunning. I loved loved loved this book please read it.