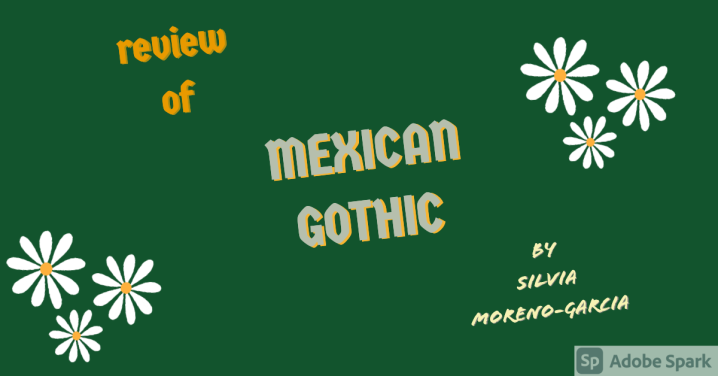 Another full length(ish) review of Mexican Gothic by Silvia Moreno-Garcia. I was honoured enough to get an arc from Netgalley for this book, because it became one of my most anticipated books of 2020 after I read Gods of Jade and Shadow.

How can I even describe this book? Here is the synopsis from Goodreads:

An isolated mansion. A chillingly charismatic aristocrat. And a brave socialite drawn to expose their treacherous secrets. . . .

From the author of Gods of Jade and Shadow comes a novel set in glamorous 1950s Mexico.

After receiving a frantic letter from her newlywed cousin begging for someone to save her from a mysterious doom, Noemí Taboada heads to High Place, a distant house in the Mexican countryside. She’s not sure what she will find – her cousin’s husband, a handsome Englishman, is a stranger, and Noemí knows little about the region.

Noemí is also an unlikely rescuer: She’s a glamorous debutante, and her chic gowns and perfect red lipstick are more suited for cocktail parties than amateur sleuthing. But she’s also tough and smart, with an indomitable will, and she is not afraid: not of her cousin’s new husband, who is both menacing and alluring; not of his father, the ancient patriarch who seems to be fascinated by Noemí; and not even of the house itself, which begins to invade Noemi’s dreams with visions of blood and doom.

Her only ally in this inhospitable abode is the family’s youngest son. Shy and gentle, he seems to want to help Noemí but might also be hiding dark knowledge of his family’s past. For there are many secrets behind the walls of High Place. The family’s once colossal wealth and faded mining empire kept them from prying eyes, but as Noemí digs deeper she unearths stories of violence and madness.

And Noemí, mesmerized by the terrifying yet seductive world of High Place, may soon find it impossible to ever leave this enigmatic house behind.

Mexican Gothic by Silvia Moreno-Garcia was a breath of fresh air.

In this adult gothic horror novel, Moreno-Garcia masterfully weaves a storyline weeping with twists, unlikeable characters and most creepy of all, pulsating, brainwashing, poisonous sentient mushrooms. This book had it all. I typically steer clear of horror novels because they are not usually what I enjoy to read as I find them formulaic and not overall engaging or enjoyable. I wanted to read ‘Mexican Gothic’ because I had previously read ‘Gods of Jade and Shadow’ by the same author and fell in love with her writing. I must admit, ‘Mexican Gothic’ blew me away with how much I enjoyed it. I was on the edge of my seat for the entirety of the book.

Mexican Gothic tells the story of Noemí Taboada, who upon being told by her father that her cousin who has just gotten married, is in need of help. Noemi embarks to High Place, the perfect 1950s mansion for our gothic horror setting, and immediately is wary of the family her cousin has married into and the house itself. After a slow-burn beginning, Noemi stars to unravel the tightly held secrets of this place and the family, not knowing the depth of horror she has uncovered. Moreno-Garcia perfectly painted a terrifying picture: with hallucinations and dreams that feel like and act like reality, with lond empty darkened hallways, the feeling of being watched, the apparitions at the edge of Noemi’s vision. The atmosphere was incredibly terrifying and I absolutely loved it.

Taking up the classic gothic tropes, what I also loved was the character of Noemi herself. She was not passive or weak, she had a her own agency and it was through her that the story found its pivotal moments. Noemi had such a strength to her character that I found myself incredibly invested in her survival. It was Noemi who was the hero of this story.

One of the major elements of this book that I loved was Moreno-Garcia’s writing. It reminded me of the way Carlos Ruiz Zafon wrote in ‘The Shadow of the Wind’. There is a descriptive element to the writing, a telling, that I fell in love with. I know that some people will find this to be a negative, but it is a style of writing that I thoroughly enjoy and Moreno-Garcia is almost masterful with her writing in this way.

And that’s it for today, my loves!

I hope you enjoyed it and let me know if you have read it!