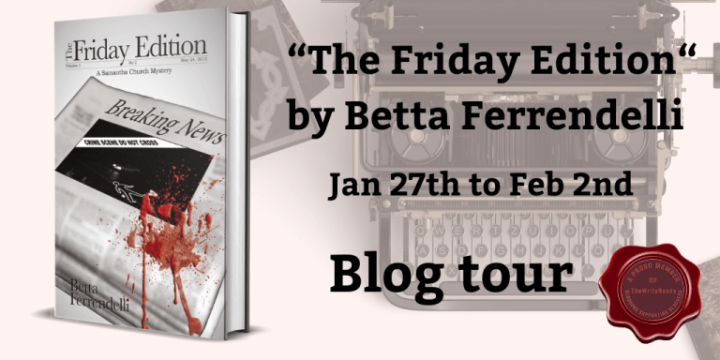 G’day friends! Today I bring to you a review of Betta Ferrendelli’s The Friday Edition for The Write Reads Blog Tour!

Please excuse the length of this review – I spilt coke on my laptop and my review didn’t save to my onedrive!!!!! So this is going to be briefer than originally anticipated, so please forgive me!

The Friday Edition by Betta Ferrendelli is the first book in a Samantha Church Mystery series and concerns a woman trying to discover the truth about the supposed suicide of her sister, the Truman County District Attorney.

Here is the synopsis from Goodreads:

Christmas is coming to Denver, Colorado, but it isn’t only snow that’s falling.

A beautiful young woman, who also happens to be a Truman County Assistant DA, tumbles from her apartment balcony to her death on Christmas Eve.

The incident is ruled a suicide, but the DA’s sister, newspaper reporter Samantha Church, isn’t buying it.

Feverishly Samantha throws herself into finding out what really happened to her sister. She pursues her sister’s killers, maneuvering through a minefield of intrigue deliberately set out to divert her from the truth. She invariably stumbles when confronted by the inescapable specter of a greater enemy: the alcohol dependency that has already cost her the respect of her peers, and, worse, custody of her daughter.

Samantha must summon the courage to face not only a cartel of criminals, but also her own demons. Physically threatened and betrayed, she nearly defeats herself through her own insecurities and fears. She not only must summon the courage to get beyond her own shortcomings, but she must work quickly to beat her nemesis – a reporter at the major metropolitan daily newspaper, who is also in close pursuit of the developing story.

Can Samantha ultimately prevail, write the biggest story of her career, and finally begin to change her life before it is too late?

This book considers many themes, most incredibly hardhitting. Alcoholism is a significant aspect of this book as Samantha is at a real low point. Her daughter has been taken away from her, she feels like she’s drowning and her ex-husband is being his typical self – that is, kind of an asshole. It is at this point in which she’s told that her sister committed suicide, but Sam is completely against that conviction. She knew that her sister would never do that; not to herself but also, not to Sam. What follows is Sam’s determined journey to figure out what really happened to her sister that night she fell off her apartment balcony.

Although I found the overall storyline to be an interesting one, especially the elements that explored the themes of alcoholism with Sam and within her family. I also enjoyed the murder mystery aspect, however, I did not quite connect nor enjoy the character of Sam very much. I initially found her character to be quite frustrating at times and I could not quite connect with her dialogue. I found Sam’s dialogue, in some instances, to feel quite forced and not authentic. For instance,

We have a painful memory of Christmas morning that you know nothing about, Jonathan.

Such dialogue kind of made me cringe because I felt as though it was not a realistic portrayal of how someone would speak in this intsance. I’m most likely incredibly picky, but that’s just me. I just couldn’t connect with her and at times, did not really like her very much but I could respect her journey and her motivations.

I also found, especially in the beginning, that there were slight inconsistences with details. For instance, when Sam gets told about the death of her sister, Jonathan (who is Sam’s ex-husband and also a detective) and he says that: “…she went on the balcony and probably lost her footing by the sliding glass door”. Then within the next sentence, it is claimed that Robin (Sam’s sister) left a note addressed specifically to Sam. The fact that she ‘probably lost her footing’ is kind of forgotton and then the narrative turns to Robin jumping. How could she lose her footing on the balcony because she was drinking but also leave a note and intend to commit suicide? Didn’t make sense. I most likley missed the reiteration of this aspect of the story, the ‘loosing her footing’ later on in the book but was too tired or disengaged to realise, and that is my fault.

I do, however, enjoyed reading how Sam grew into herself along the journey she embarks to find the truth of her sister’s death. She begins quite selfish, and I think she ends also still somewhat selfish, but has different priorities and is deliberately trying to work on herself. It is an interesting and unique premise, which I would recommend people reading. I would give it a 3 out of 5 stars and although I wasn’t able to fully be invested in the story, I really do believe thats fans of murder mystery would absolutely love Samantha Church and this series.

Until next time, friends! Happy reading!

Betta has been an award-winning journalist since 1989, having worked at newspapers in Denver, Seattle and Albuquerque. When she is not “novelling” as her sister used to say, she writes for a healthcare magazine.
On July 7, 2012, she published The Friday Edition, the first in an award-winning mystery series featuring newspaper reporter Samantha Church. The second book, Revenge is Sweet, published in November 2013 and Dead Wrong, book three, published in January 2015. Cold Case, No. 99-5219, the fourth book in the series, published in January 2018. On the Border, the fifth book in the series, will publish in early 2020.
She also has published two award-winning books in contemporary, women’s fiction: An Invincible Summer in September 2015 and Last Things in November 2016.