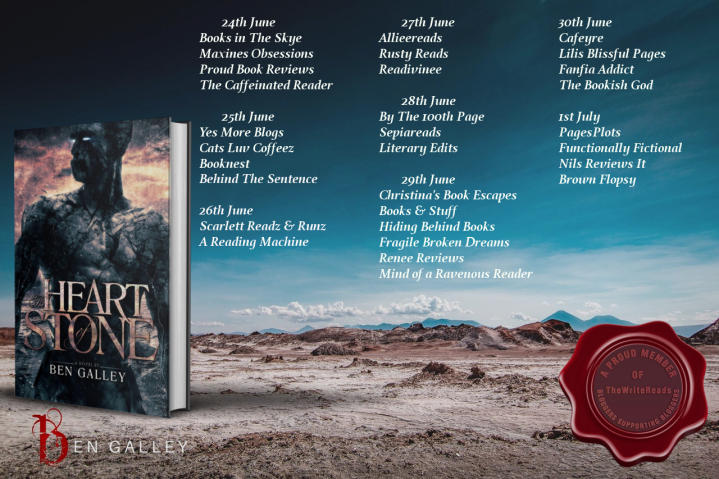 Today, I bring to you a review for Heart of Stone by Ben Galley, as part of the epic TheWriteReads Blog Tour! I’m super excited to write this as I’m writing this slightly differently than usual…

I’m going to write this review in increments, in that, each 100ish pages, I’ll be writing my thoughts and impressions! This way, you get a more detailed review and I remember more things because I’m writing as I go!

Let’s begin this journey, shall we?

Heads up: As I’m doing this review in increments, I’ll be talking about a mixture of narrative and characters, instead of breaking it into sections like I usually do.

Okay, I need to get this out of the way, but the way the author writes Task is so effing good. From what I understand, and this may be wrong as I’m still not that far into the meat of the story, but Task is a magic-creature forged from stone. He is an immortal being, who can still be killed (something about the tongue?) and he has such a big heart, oh my lord. He is literally precious, I am dying.

So Task, a Wind-Cut Golem, has never been free. He is contracted to a ‘Master’ and he is obliged to do their bidding. I just want to wrap Task in my arms (even though, I’m pretty sure I’m too small to wrap around his 9 foot frame, but still) and let him have his own farm somewhere where he can bask in the rain and the sunshine and not have to destroy anyone. Task is the strongest character within the narrative, at the moment, as it should. But Galley ensures that the other side characters are unique with their own individual voice.

I still think that Baroness Frayne is a little bit suspicious and my gut feeling is pushing me to not like her – I think she is written to be an unlikeable character, and that is done exceptionally well. I’m intrigued to how and what she is concocting, to be honest.

Let’s talk about Huff, Task’s master. I fucking hate the little bastard. I want to punch him in his little entitled face. Gosh darn, Galley writes characters you love to hate, so well.

I don’t quite understand the reason as to the war between the Truehards and the Fading (I am pretty sure that is the name of the other group), even though it has been explained but I’m still slightly confused. But I am intersested in how the Mission (Church?) ties in with everything, especially considering that Baroness Frayne is consipiring with them? working for them also? working as a double or triple agent?

I think one of the strengths of the narrative is that the side characters provide the overall storyline with a depth of texture so you get a very layered narrative; it creates a more complex narrative and contextual backdrop for the story.

ALSO, Lesky is absolutely hilarious and I thoroughly enjoy her character and the way in which she engages and interacts with Task like he is just another person, and not a ‘creature’. I think Lesky is one of the first characters that just treated Task like a person, and she already understood on a subconscious level, that Task feels and he feels deeply. I really hope that their relationship grows in a positive way.

Also, if at the end of this, Task dies I WILL BE VERY ANGRY MR. BEN GALLEY (EDIT: I DIDN’T KNOW YET, MR. GALLEY, I DIDN’T KNOW IM CRYING HOW COULD YOU)

“Like the rain he let gnaw at his stones, it was the challenge of it all that made Task grin; the whiff of mortality that bewitched him.”

There are sentences that I read and I just think, damn, I feel that. Do you know the feeling I’m talking about?

I think we’re coming to a point in the narrative where things are kind of slowing down. It feels like we are leading up to something big.

Everytime I walk into a room, I’m literally going to yell out “Right, you scrotums!’ a la Sergeant Collaver.

I honestly feel that there is more to the character of Task, and I don’t mean his characterisation within the narrative, but I mean how we, as readers, engage with him. Task is the personification of raw power, and when Humans are given that opportunity, raw power acts as a corrupting force. We see that with Huff and we see that with Task’s history. He is made to only destroy and to cause fear, and it is heartbreaking to read. If you think about it, take out Task and put Cannons or automatic weapons – those which ‘revolutionised’ military warefare, the impacts it had and the power it gave to those armies. Task is symbolic of that.

I think this quote beautifully summarises the human condition:

There will always be war. So long as man has more or less than his neighbours, there will be war.

SO WAIT BARONNES FRAYNE IS A DOUBLE AGENT I WAS RIGHT?? SHE’S LADY AUGER SPYING ON THE TRUEHARDS FOR THE FADING??? I kind of saw it coming but still I am surprised. Wait, is she? I just want to know what game she’s playing.

I completely forgot about Alabast, the Knight of the Dawn. He’s an interesting character. I don’t personally like him, but I don’t think that’s important to the overall narrative. How he will eventually interact with Task is something that I’m looking forward to.

I do feel as though the story has slowed down. Although that is not an issue for me, I hope it doesn’t slow down too much and become draining to read. At this point in time, I have around about 200 pages to go so there is still a significant amount of time and I have this feeling that shit is about to go down.

YALL SHIT IS GETTING REAL TASK OUT HERE SQUASHING HEADS LIKE IT AIN’T NO BIG DEAL MY PRECIOUS BABY.

We got more of an insight into Baronness/Zealot Frayne who is also Lady Auger. I really enjoy reading her perspective now, which surprised me, her characterisation is a lot more complex than the other side characters we meet throughout the narrative. She is literally playing such a dangerous game and I think it has something to do with revenge, as we saw in the opening of the book…

Task’s character is slowly developing, but I’m getting slightly frustrated by how easily he falls for Frayne’s manipulations! He notices when Lesky is lying, claiming that he is able to spot a lie on a human after a few times it occurs, but he is literally blinded by Frayne. The addition, however, of the second golem is a nice touch and I really hope it adds something to the narrative to push it forward.

This is the section in which the specific plot points that have been overarching the entire narrative, begin to unravel. I think I’ve said this, but I’ll say it again, the character Task is one of the most effective characters I have read. He has such depth to his character without it feeling disingenious – the development and the way in which he grows, is written with a flow that interweaves and builds slowly. This section, we see a side of Task in which he is grabbing his own destiny by his stone-blade hands and making decisions for himself! What I do kind of wish was that the relationship between Task and Alabast was given more time to forge, because I think them two would be absolutely hilarious…can you imagine?!

We also see more of the character Frayne and Lesky because that plotline becomes more intertwined with the major plotline, which is super cool to see. There is a hope though, that we just are able to know Frayne’s motivations and ambitions – I don’t trust her character, which makes it worse, so I’m constantly doubting whatever she says. Although I think her character is very well written, the mystery of her identity is slightly frustrating.

Not going to lie, I didn’t really like the way Franye’s ‘climactic’ moment was written. For all that mystery, the intrugue, the lies and the manipulation – just for that? She is such an intricate character, and she’s painted as nothing but ‘evil’? I know there is dialogue in which Franye is practically justifying herself and her actions to Lesky, but it just seems to lack something that has been there throughout the entire narrative, with Frayne’s character.

oH WHY. THAT ENDING. WHY.

It was a beautiful ending in that I understood how it made sense for Task’s character to sacrifice himself for the Realm, but like, did he have to?

Even though Lesky is obviously an important character towards the end, I still don’t really have that connection with her. I think she was pushed to the side more often than not, which again, understandable, but I don’t really feel like I know her. And, I’m going to say it again, Frayne’s ending was disappointing.

Overall, because we have now reached the end of this review and I really enjoyed writing it this way actually, I rate Heart of Stone by Ben Galley a 4 out of 5 stars. I loved the writing, I loved Task, the side characters were unique as well as the premise; however, I felt that there was a pacing issue throughout the narrative, as well as not enough exploration into the actual world that this narrative was a part of. Considering that Task lived in this Realm for 400 years, we really don’t know much about it.

Well, that’s it for today, friends! I hope you enjoyed it! And make sure you check out the other awesome bloggers being apart of this blog tour, not just for this book, but also for all of Ben Galley’s works! Check out The Write Reads for all your needs!

Until next time! Happy reading!

Ben Galley is an author of dark and epic fantasy books who currently hails from Victoria, Canada. Since publishing his debut The Written in 2010, Ben has released a range of award-winning fantasy novels, including the weird western Bloodrush and the epic standalone The Heart of Stone. He is also the author of the brand new Chasing Graves Trilogy.