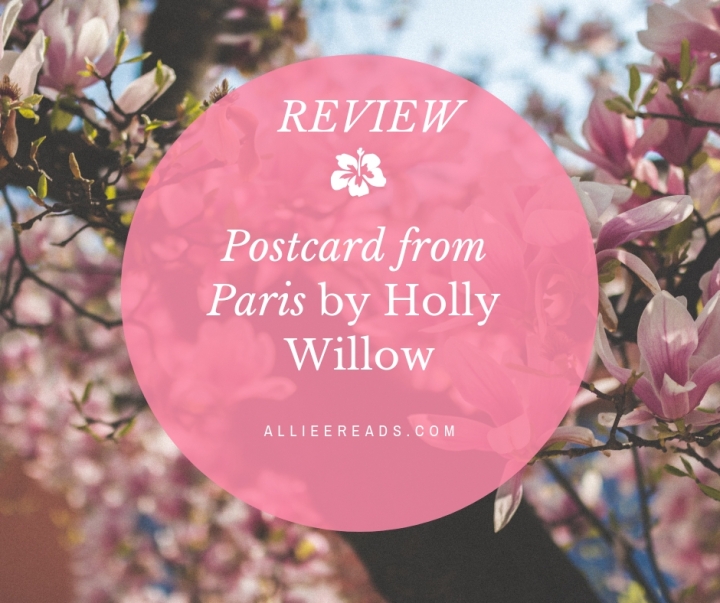 A sense of euphoria washed over me. For the first time in my life, I had made a split-second decision. I was going to do something that I hadn’t scheduled or planned for at least six months in advance. I was going to Paris.

Postcard from Paris by Holly Willow was the romance novel I needed this month. The novel is set in both Boston, Massachusetts and Paris, France wherein the female protagonist, Poppy, begins to understand the meaning of fate.

A series of unfortunate events leads Poppy in finding a random postcard at her parents’ house by an aunt she legitimately had no idea existed. All of a sudden, in the aftermath of assuming that her fiancé is having an affair and that he just left for work in Hong Kong for six months thus postponing the wedding, she seizes life by the balls and books a flight to Paris to meet this mysterious aunt.

But also to maybe find herself, too.

Poppy in Paris is where she finally realises that she was made for more than just falling into a logical relationship; more than a job that has taken her for granted; just more. With the warm love and welcome of her mysterious aunt, Poppy finally settles into the Parisian lifestyle.

Oh, and she accidentally, may have pretended to be someone else to land a job with the hot author who lives with her aunt.

It was a super quick and cute read that had me hooked till the very end.

If you want more of a concise synopsis, here is the Goodreads blurb:

When Poppy finds a postcard from Paris, sent by an aunt she didn’t know existed, she books a flight to France to investigate. Just days after arriving in Paris, she accidentally lands herself a job thanks to a case of mistaken identity. To complicate matters further, she soon starts to fall for her new boss. Falling in love with your boss is never a good idea and she knows

Overall, I think the writing style really suited this type of narration. In the sense that it was fast-paced, easy to understand, humorous and completely relatable. It was a solid adult romance, and I’ve missed them so much! I didn’t realise how much I’ve missed a good old fashioned adult romance book until I read this one and I was like, awwwww. The simplicity of it calmed me.

Narratively, I was so happy that there was no major dramas that fell into the territory of ‘trope-land’. For me, when such tropes like ‘mistaken identity’ or ‘miscommunication’ are used in romance, it’s usually utilised for a few chapters which makes the entire reading process drag on and so much more frustrating than it needs to be. In Postcard from Paris, however, this was not the case. The author, Holly Willow, ensured that she made the story as realistic as possible – and having a mistaken identity trope that lasts for months is not realistic. Having characters that don’t talk to each other out of stupidity is not realistic. In this case, though it takes Poppy a couple of chapters, she comes completely clean to James, the attractive author and male romantic interest, about her identity and it’s fine! They communicate, even though James already knew because in reality, you can ask people questions pertaining to the identity of the supposed pretender!

I found that I quite liked the maturity of the story, because the characters are mature, and everything is dealt with and not much is left with loose ends.

They only issue I had in terms of the narrative, is that there was this competitiveness or judgement that was passed upon other women in a way that attempted to demonise them or to make Poppy stand out for being so different than them. For instance, James’ character is a widower and his late wife passed away by accidental suicide. James’ late wife, Gabrielle I believe, was manic at the time as she wasn’t taking her medication for her Schizophrenia. So she had a clinically diagnosed mental disorder, but James kept on comparing his late wife to Poppy by portraying his late wife as this lying, manipulative woman who set out to constantly hurt him. And the comparison was a consistent aspect throughout the romance element of the story. Although it didn’t detract my enjoyment for the story, it was something that niggled at the back of my mind as frustrating.

The plot twist of the entire story was well done, and although I predicted it, it was so good to read and see how the family skeletons are then uncovered and the way in which the characters react – it was just so well written.

It was a breath of fresh air.

I would have wished for the storyline to flesh out the romance between Poppy and James slightly more. I felt like I missed the pining and the longing, and the stolen glances or even the domestic bliss and going on dates – little things that show the developing relationship between the characters. I did feel that it happened super fast – from James being Poppy’s boss to lovers, so having the romance element more fleshed out would have made this book a 5 star one.

Brief thoughts on the Characters

In terms of the characters, I found Poppy Parker to be a woman that I was supporting. I wanted her to succeed, I wanted her to be free and realise how big the world was. I just adored how she was characterised – super independent, hardworking and intelligent, and so incredibly relatable. Poppy’s mysterious Aunt, Selma, was AMAZING – like, I would love an entire book about her because she is literally so inspiring and so absolutely fierce!

The male romance character, James, was one who I wished we could have read his perspective. He is the type of character who keeps most things that are of the emotional in nature, to himself – so having the ability to read the events of the story from his perspective would have added such a depth to his character. I also wish that his relationship with his step-daughter would have been explored more, and how the daughter and Poppy’s relationship grew also, because that would have been quality content.

Overall, I rate Postcard from Paris by Holly Willow a 4 out of 5 stars because it honestly kept me engaged till the very end and it was super enjoyable. If you want a weekend read, something to cozy up with on the couch with a nice cup of tea, this is the book for you.

That’s it for tonight, my loves! Until next time, happy reading!

NOTE: I would like to thank the author for giving me a free copy of the novel in exchange for an honest review.