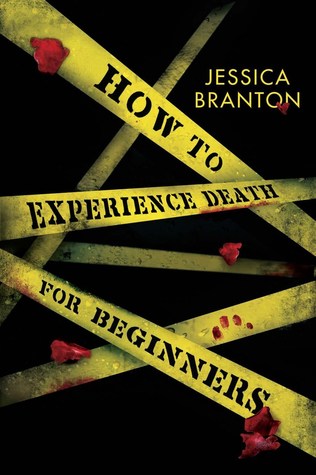 I had just witnessed a murder for the first time in my life.

Hello friends! Today, for the 3rd day in a row, I bring to you another book review! This time a debut YA thriller which focuses on the psychic power of Casey Darling who is gifted (or cursed?) with the ability to witness and experience the deaths of those around her. When Casey begins to experience the horrifying and grisly deaths of people within her community, all murdered by the same person, she begins to suspect the existence of a serial killer. What follows is a disturbing set of events which result in the local detectives in suspecting Casey for having a hand in the murders. Casey, alongside her twin sister Christina, her maybe-crush Cameron and bestie Danny, take on the chilling case of finding the killer and proving Casey is innocent.

Before I delve into this review, I will leave the synopsis down below. It can also be viewed on Goodreads:

This novel was promoted to me as one that was written by the author as a young 14-year-old. Unfortunately, you can tell.

The premise of How To Experience Death for Beginners is inherently creative and I was very excited to read it. Psychic powers, a murder mystery and a romance?! Sign me up! But although it was an original plotline that could have been an amazing novel, I felt somewhat underwhelmed whilst reading it. As this section is one that is more focused on the story itself and writing, I’ll limit the discussion of characters as much as I can.

Let’s begin with the actual plot.

As I said before, the premise was promising but the execution could have used some more work. And by work, I mean editing and re-writing of characters, narrative and language. The plot itself I could vibe with, but it didn’t flow in a natural way. The best way I could describe it is that there was a sense of the chaotic. Minor plot points would randomly jump out of nowhere in a bid to add points of contention for the protagonist to get through or attempt to add ‘depth’ to her character. I felt as if the author didn’t quite know the route that the story was going to take, and hence the chaotic feeling when reading this novel.

The psychic/clairvoyance/supernatural abilities aspect of the storyline had such great potential. Again, it was quite a creative and original take on the usual cliche that we see in YA regarding supernatural abilities. However, the writing and explanation of said abilities became extremely confusing and contradictory. For example, when considering Casey’s psychic abilities, in the beginning, and briefly reiterated throughout the novel, she claims that her abilities to see someone’s death are in relation to how well she knows someone. This is why she doesn’t open herself up to people. But then, she would have a vision of a random grandmother dying in her hospital bed that she’s never met. It just didn’t make sense at all and was extremely contradictory to the overall ‘canon’ of the novel.

The plot surrounding the serial killer and murders needed to have slightly more effort into making it more believable. I feel as though the intention of the novel was for the Casey and her gang to be like a psychic version of Nancy Drew & Squad – trying to find a killer themselves. But, instead, it comes across as completely immature with Casey and her friends doing the most thoughtless things which frustrate the reader in how idiotic their actions are. For instance, there’s a serial killer murdering people in the woods, the police and the mayor have instituted a county-wide curfew, what do you think they did? Went into a cave in the woods where ‘no one would find them to tell them off’.

It was so frustrating and they did this countless times.

I’m not even going to talk about how Casey hid evidence in a bid to ‘maintain her innocence’.

Thoughts on the Characters

As an overall, I found the characters to be significantly two-dimensional. I wasn’t able to emotionally connect with any of them and it really hindered my ability to enjoy the experience of the story.

The main protagonist, Casey Darling, I found to be quite an unlikeable character. The fact that she has flaws is not the issue here, I love my characters as real and raw as possible. My issue with Casey is that I found her to be the epitome of every female YA romance protagonist ever, in that, she made ridiculous decisions, complained about literally anything and everything, was extremely disrespectful to her sister (and her mother, but there are reasons) and did not understand the impact of her actions or decisions on anyone other than herself. I understand that Casey’s characterisation is meant to come across as a headstrong and independent young woman, but the execution of her character belies this.

However, the main issue I had with the writing of Casey’s character is her attitude towards mental health and the mental health representation within the novel. Casey’s sister, Christina, and Casey’s ‘romantic interest’, Cameron, both battle mental health disorders, and this aspect of both characters are used as minor plot points.

Christina has selective mutism, a result of the trauma of losing her and Casey’s father. Now, selective mutism isn’t so much as ‘choosing’ when you want to speak or not. It’s in connection with a severe anxiety disorder as a result of situations that makes individuals feel unsafe, or insecure or extremely anxious. Individuals who have selective mutism then utilise the ability to control their voice as a coping mechanism to this feeling of being completely overwhelmed and overstimulated. As points of contention, Casey mocks Christina’s mutism and implores her ‘just to talk’, when it’s so much more than that.

If Christina was written authentically, her character should have been undergoing treatment in the form of behaviour therapy with a psychologist or psychiatrist. It surprised me that, even though Casey and the mother know of Christina’s selective mutism and how crippling it is for her day-to-day life, there’s no support for her.

Cameron’s character was one that I disliked and felt added really nothing to the overall narrative. Cameron suffers from self-harming and Casey finds out through a vision, which is confusing in itself. But the way the author and thus, Casey, deal with Cameron’s disorder is just to tell him to stop by making him promise not to self-harm anymore. This is what I mean when I said before that How To Experience Death For Beginners should have been edited a bit more vigorously as this is extremely problematic. Self-harm is typically a sign of a deeper mental health disorder, such as anxiety, depression, etc. It also requires a treatment plan by a psychologist.

I.E. people don’t just stop because someone else tells them to. It’s like if someone told me to just ‘don’t worry about it’ or ‘stop being so anxious’, my anxiety doesn’t work like that and neither does self-harm.

Cameron as a character reminded me of what I thought was cute back when I was in high school. I found him to be an extremely pushy character who didn’t listen. Various times Casey told Cameron that she wasn’t ready nor looking at being ‘more than friends’. But Cameron just kept on hanging on creepily in the background, complaining that he wanted more friends but then trying to pressure Casey to be more. Added to that, I disliked how there were times when Casey would either say no to being together or just needing space, and it would be implied that Cameron would self-harm because of Casey’s actions. Then, Cameron’s grandmother and Cameron himself talk of how ‘happy’ Cameron is now that he has Casey in his life and how because of her ‘he’ll get better‘.

As I’ve said before, let’s not romanticise mental illness. You can’t magically get better when you’ve been suffering for so long. Additionally, women aren’t rehabilitation centres for men, as that viral tweet has preached. I just found it uncomfortable and problematic.

If you enjoy the works of Jennifer Niven and even maybe Stephanie Perkins, you may enjoy How To Experience Death for Beginners by Jessica Branton. A creative and original premise, though lacklustre, showcases the imaginative mind of Branton and one that I will be looking forward to reading in the future. I give How To Experience Death for Beginners a 2.5 out of 5 stars.

That brings this review to a close. Until next time, happy reading!

NOTE: I want to express my deepest thanks to Rebecca Kelley at Mindbuck Media Book Publicity for giving me a free copy of the novel in exchange for an honest and unbiased review.