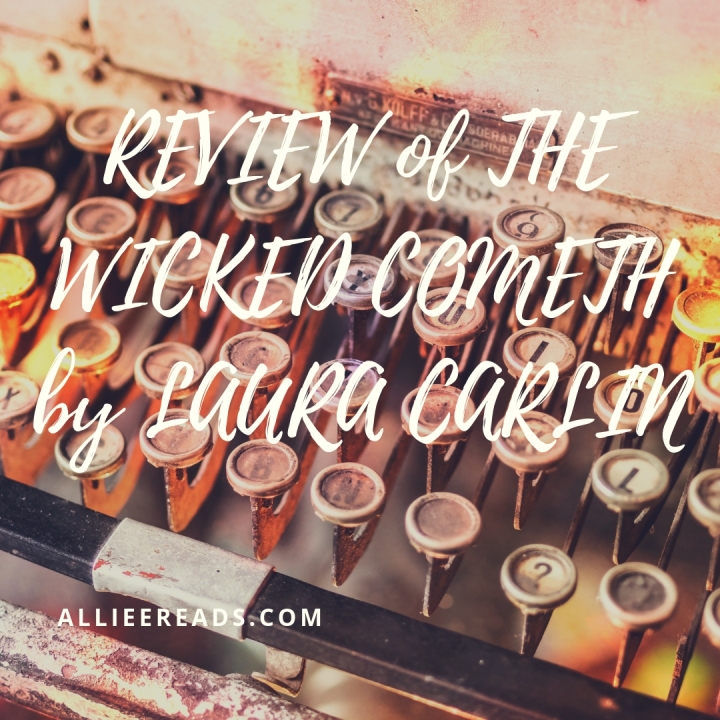 My knees tremble beneath my skirts as I realise what mortal peril Rebekah and I are now in. For the present time, I must swallow up my anger, repress my thoughts of Meg and try to play Morton the fool.

I just finished Laura Carlin’s The Wicked Cometh this morning and I immediately opened up my laptop to write this review quickly! To be quite honest, when this book was released earlier this year, I did not actually know of its existence. Strange, since it has all the good stuff – historical murder mystery and a wonderfully happy-ever-after lesbian relationship. I don’t know about you, but I am so sick of reading LGBTQIA fiction that ends in death or despair. Sometimes, the story warrants it, but come on! Sometimes the readers just want a fabulous romantic story with a non-heterosexual couple that does not descend in absolute misery!

The Wicked Cometh is such a wonderful story. It centres on the life of Hester White and her wealthy Mistress, Rebekah Brock. When Hester enters the residence of the Brock family as a result of slight subterfuge in order to be under the tutelage of Rebekah herself! What follows is an insane kidnapping and murder mystery that Hester is right in the middle of! With a side dish of romance. It honestly put me on the edge of my seat and I couldn’t put the book down!

The synopsis of The Wicked Cometh by Laura Carlin can be also found on GoodReads and is as follows:

Down the murky alleyways of London, acts of unspeakable wickedness are taking place and no one is willing to speak out on behalf of the city’s vulnerable poor as they disappear from the streets.

Out of these shadows comes Hester White, a bright young woman who is desperate to escape the slums by any means possible.

When Hester is thrust into the world of the aristocratic Brock family, she leaps at the chance to improve her station in life under the tutelage of the fiercely intelligent and mysterious Rebekah Brock. But whispers from her past slowly begin to poison her new life and both she and Rebekah are lured into the most sinister of investigations.

Hester and Rebekah find themselves crossing every boundary they’ve ever known in pursuit of truth, redemption and passion. But their trust in each other will be tested as a web of deceit begins to unspool, dragging them into the blackest heart of a city where something more depraved than either of them could ever imagine is lurking . . .

I love this book! I didn’t really know what to expect, only that my sister-from-another-mister Hannah, thought it was fabulous! So I knew I had to read it and I am so glad I did. Hester White was a well written character who knew her worth and worked hard to prove herself. She came from a pretty financially stable family and her father taught her how to read and write – which was a novelty in the 1800s where literacy was for the wealthy aristocrats. After Hester’s parents are killed in an accident, and no family comes forward to care for poor little Hester; Hester goes to live with the gardener of her family’s house, Jacob and Meg. Poverty follows and Hester grows up in the dregs of society – where no one asks questions and filth festers.

When Hester becomes a maid and a sort-of experiment for the Brock family, a deep friendship begins to bloom between Rebekah Brock and Hester White. Both women, unknowing of what their feelings are towards each other, only know that life without the other is too sorrowful to bear. The romance occurs as a backdrop to an even greater conspiracy that incorporates family secrets and the perversity of humanity.

Hester and Rebekah become embroiled in the mystery in order to find out what happened to the young women, men and children who have seemingly been whisked off the streets and never to be seen again.

Carlin writes seemingly flawlessly. She masterly weaves the historical with the fictional and creates such an immersive narrative was surprisingly more gory than I ever thought it would be. Hester and Rebekah are both extremely strong and independent women, who fight for their worth and are not afraid to show when they are fearful or doubtful or just plain irritable. They are super strong female characters and I adore Carlin for writing them as such.

If it isn’t obvious, I rate The Wicked Cometh by Laura Carlin a 5 out of 5 stars because it was a fabulous read with fabulous female characters, a beautiful love story and a thrilling crime mystery. It was just an awesome read and I recommend it for lovers of women’s fiction, historical fiction and romance.

That’s it for today’s review, my friends! Until next time, happy reading!

✨July reading wrap up! I read 12 books which I’m pretty happy with and I was able to read some chonky books too!
🌈✨ I finally read On Earth We’re Briefly Gorgeous by Ocean Vuong this week. To say that I loved it would be an understatement.
🔪 hi friends ! It’s been a few days - sorry about that, Uni has been taking over! But I have been reading!
I reorganised my shelves and it’s mostly based on vibes. ✨
🌈 I don’t have the proper words to describe my feelings for the Argonauts by Maggie Nelson. All I can say is that I cited, I laughed and I learned so much. What a wonderful weaving together of memoir and theory.
✨ the secret lives of church ladies by deesha philyaw would have to be my favourite short story collection I’ve read up to this point.