Magic is real, Thomas. No matter what happens, always remember that magic is real. – John Wildus

Before I begin this review properly, I do want to briefly discuss my thoughts prior to actually reading Thomas Wildus and the Book of Sorrows. Either unknowingly or knowingly, before we begin a book we do have at least a layer of preheld suppositions concerning that said book. This can be through what you’ve heard throughout the bookuniverse on Twitter or Instagram, the synopsis you read on GoodReads and the reviews that you may or may not have perused. Even though I try to always begin reading a book completely free from bias or opinions – sometimes, that is not the case. Before beginning Thomas Wildus, I was both intrigued for the plot but also slightly underwhelmed. I think this was mainly because the premise was extremely familiar to me (think Harry Potter or Percy Jackson with magic) and also because having boys as the central protagonist in a magical adventure series has been done before; sometimes well and other times, not so much.

This was my opinions before even opening the book, which is not at all super good to have as a reviewer. But in saying that, it was all the more awesome when I enjoyed the novel and connected with the cast of characters.

The synopsis of Thomas Wildus and The Book of Sorrows by J.M. Bergen is as follows, and can be also viewed on Goodreads:

Seven years have passed, and Thomas hasn’t forgotten. He hasn’t forgotten the blue of his dad’s eyes either, or the tickle of beard on his cheek as they hugged goodbye. Last moments with a parent are memorable, even if you don’t know that’s what you’re having at the time.

Now, with his 13th birthday rapidly approaching, Thomas’s search for magic is about to take a radical and unexpected turn. At an out-of-the-way shop filled with dusty leather books, a strange little man with gold-flecked eyes offers him an ancient text called The Book of Sorrows. The price is high and the rules are strict, but there’s no way Thomas can resist the chance to look inside.

With the mysterious book guiding the way, a strange new world is revealed – a world in which Thomas has a name and destiny far more extraordinary than he ever imagined. But time is short. Even as Thomas uncovers his secret family history, enemies emerge, threatening to end his rise to power and destroy everything he holds dear.

Immediately, the reader becomes aware of the talent and writing ability of Bergen. Bergen is able to craft a somewhat original take on the cliched storyline with great characters, a story wrought with mystery, danger and suspence at every turn. For a novel geared towards middle grade fiction, it certainly kept me engaged till the end. Though the whole ‘Thomas being chosen to have the Book of Sorrows’ sort of ‘chosen one’ feel, is one that can easily frustrate me; in this case, it didn’t overshadow the characters nor their development, and actually enabled the narrative to grow and build its crescendo. 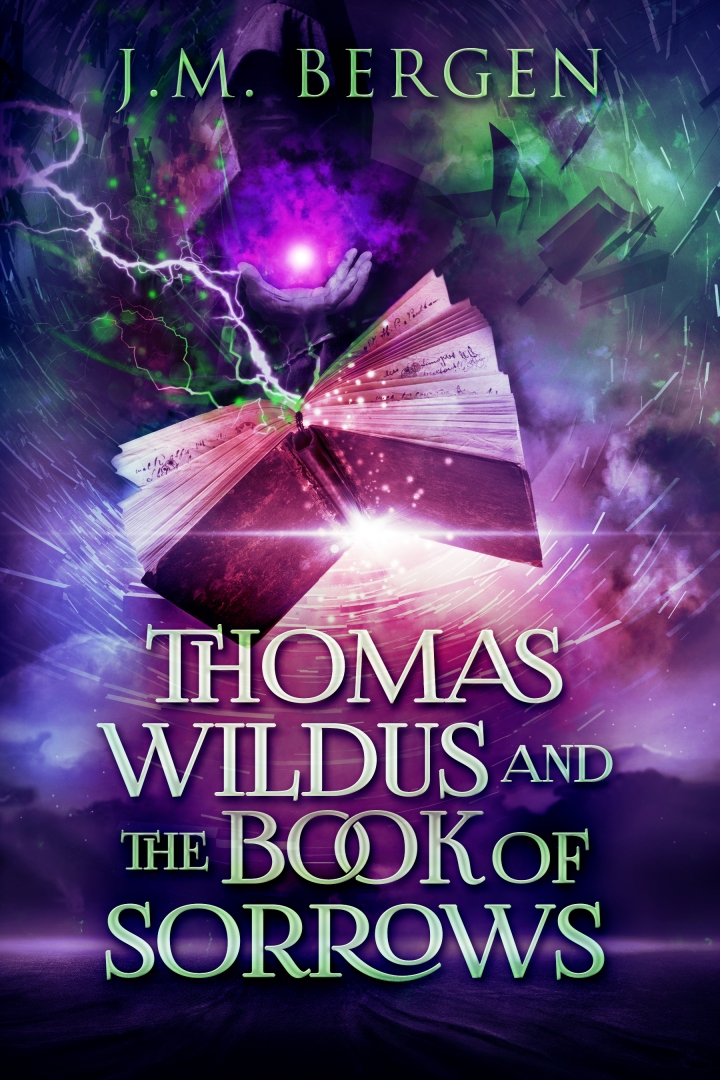 The story itself solid; the concept of an enchanted magical book and the power of crystals, Thomas is wisked away on a completely magically-filled journey for the ULITMATE mission – saving the world from evviiillllll. On the journey, Thomas not only learns about the magic within but also who and what he is. One could say it also considers the development of identity through Thomas and his adventure.

There is quite a slow build up as most of the actual ‘action’ of the narrative does not occur until the midway through the novel, and this would be one of my critiques of the narrative and writing style. I felt as though there was quite a signicant amount of unnecessary explanation of mundane tasks or events, such as eating dinner, etc. Basically, it was a lot of telling which bogged up the flow of the narrative. For instance, the ‘villain’ is discussed throghout the entire book, I think as a build up to the climax, but it fails as it just becomes inane after a certain point. There is no actual interaction between the villain and Thomas until the end – and again, it gets bogged down with this unnecessary drivel that I think is meant to be a murderous monologue, or something. Additionally, there were times when the dialogue and the interactions between characters felt quite forced and stilted, as if the author did not quite know how to write conversations by 13-year-olds.

It felt off at times, I must admit.

Characters and then, criticisms

Thomas Wildus is adorable. He is a wholesome bean of sunshine who is extremely kind, humble, intelligent and has such strong moral principles that you just can’t help but hope he kicks ass. I thoroughly enjoyed reading his character – he is the type where you just adore him. He really has a heart of absolute gold. I do have to admit that I have been finding it increasingly difficult to connect with male protagonists recently, I think it’s because there are just so many books with men as the central figure, that I can sometimes find the books to be disengaging. But in saying that, I found Thomas’ character completey relatable and lovable. Which I was thankful for!

While there is strong(?) diversity in this novel, the characters are part of the background characters or cast of characters – with Enrique, who is the best friend (and whose character I feel is going to grow) and who is Hispanic, Akhil who is Indian, Jameel who is African and Meng (or Ming? I am not too sure which is the spelling error) who is Chinese American. I do have to say though, that there are aspects of perpetuating Asian stereotypes. For instance, Thomas learning Kung Fu but mainly Lin Sun, the housekeeper in China is portrayed as speaking in the stereotypical ‘broken’ English. There is this thing called mulitlingualism that could equally be portrayed as a bit more appropriate.

Now, my question – because I am not sure myself – I’ve seen that the fact that these characters are people of colour, reviewers consider this as having ‘strong’ diversity. But is it actually? Having four characters from diverse backgrounds who play small(ish) parts to the overall narrative and plot – is this the definition of a strong diverse cast? Or are they just token characters to add diversity? I do believe though, that young readers of this book who identify as a person of colour will feel alongside these characters because representation – especially accurate representation that is not defined by stereotypes – is what we need more of in all works of fiction because why has it bloody taken this long goddamnit.

Let me know your thoughts and feelings, friends, because I am asking legititmately and would love to know what you think. Remember though that the comment section is a safe space where respectful dialogue is not only encouraged, but will enforced. Just sayin.

After all that, I would personally rate Thomas Wildus and The Book of Sorrows by J.M. Bergen a solid 4 out of 5 stars. For fans of Harry Potter and Percy Jackson, I would definitely recommend this book as a must-read as it is quite a solid first book in a series that will be released in the future. Also, if you would like to read another series with a similar premise, but with a female protagonist instead, I highly recommend the Akarnae series by Lynette Noni.

Thomas Wildus and The Book of Sorrows will be released for your consumption on the 2nd of February, 2019. Purchase links can be found below.

That’s all, friends! Until next time, happy reading!

A long time ago, in a galaxy far far away…
J.M. Bergen graduated from the University of Arizona with a degree in creative writing and a minor in business. Over the years his writing has appeared in a variety of publications under a variety of pen names, and though his favorite stories are about magic and adventure, his best-known work to date has been non-fiction. J.M.’s debut series originally started as a bedtime story for his oldest son. The story turned into a saga, and one book turned into five. The first book in the series, Thomas Wildus and The Book of Sorrows, is scheduled for release in February 2019. The second, Thomas Wildus and The Wizard of Sumeria, will be published in late 2019, with
the remainder of the series released before the end of 2021. When J.M. isn’t working on the Thomas Wildus books, you can find him playing with his
kids, splashing in the ocean, or dreaming up new adventures. If you ever meet him and can’t think of anything to talk about, you might ask about Herman the Shark, the Kai and Eli stories, or why Riddle-Master by Patricia McKillip is his all-time favorite book. Or maybe, just maybe, you’ll have questions and stories of your own (if you do, he’ll think that’s far more interesting). To learn more, visit www.jmbergen.com.

Readers can connect with J.M. Bergen on Facebook and Goodreads.

4 thoughts on “#REVIEW of Thomas Wildus and The Book of Sorrows by J.M. Bergen #middlegrade #magic #friendship”